Impact to the national GDP

Water covers more than 70% of the Earth's surface, making it blue when viewed from the space. 97% of the water on Earth is contained in oceans and seas while only 3% of the total accounts for fresh water. Water sustains life and provides shelter to millions of living species. Water also makes an enormous contribution towards the beauty of nature, enabling our lives to be entertained in many ways on this amazing planet. Water sources all around the world including rivers, waterfalls, lakes, oceans etc., not only help to sustain the life on Earth, but also decorate nature for all living beings to have a fresh and calm living experience.

Water also makes an enormous contribution towards the beauty of nature, enabling our lives to be entertained in many ways on this amazing planet. Water sources all around the world including rivers, waterfalls, lakes, oceans etc., not only help to sustain the life on Earth, but also decorate nature for all living beings to have a fresh and calm living experience.

Water scarcity is one of the most critical issues we are encountering today. It is in such a context that we at SLT remind you of the timely importance of taking this precious resource seriously to retain the rich natural heritage under our long-term theme of 'Preserving Heritage for Tomorrow' if we are to preserve and sustain the life on this planet! 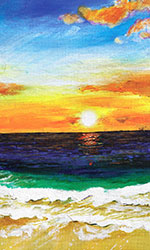 The Origin of Water

Water, the most precious resource on earth, covers more than 70% of its surface, making it the “blue planet” in our solar system. The story of how it got here is as interesting as the role it played in shaping the story of humankind. Gifted to us by colliding comets and asteroids in the early stages of the solar system, water existed on Earth in the form of water vapor at the initial stages. With the gradual cooling of the planet at later stages these vapor particles congregated to form clouds resulting in continuous rainfall that filled much of the Earth's surface with water, creating its seas and oceans. It has been estimated that this water was originated about 4000 million years ago, so when you have your next glass of water, remember to enjoy it, some of those molecules are more than 4000 million years old! 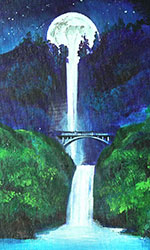 Water sustains life on Earth, and with ¾ of the world covered by it, water also provides shelter to millions of living species. 97% of this water is sea water with the remaining meager 3% of it being freshwater, essential for our survival. Ice caps and glaciers make up 68.7% of this fresh water while only 30% exists as ground water of which; 87% is contained in lakes, 11% in swamps and only 2% in rivers. These proportions have changed with the history of Earth, with the fluctuation of sea levels due to the Ice Ages. Even during the course of the year in the winter seasons both poles contribute significantly to increase the percentage of the earth’s freshwater store. 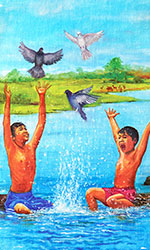 Even though the origin of life in the universe we live is still a debate, water’s critical role in its story is an established truth. In fact, scientists believe that life on Earth must have originated in our seas. According to estimates, microscopic organisms also known as microbes originated 3.5 or more billion years ago and are the common predecessors of present day living beings. Of the macroscopic organisms throughout the world, 15% live on the land while 85% live in sea water. Its association to life does not stop there, 60% of the human body is composed of water. 73% of the human brain and heart, and 83% of the lungs are composed of water. Water in the cells accounts for 70% of the total cell mass. Making it not just the pre-requisite for our life, but a large part of it as well, literally! 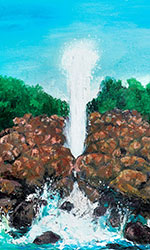 Earth is also known as the 'water planet'. It decorates nature in the form of rivers, water falls, lakes, and oceans, as a result of its ability to flow when necessitated and be still when undisturbed. It is also a solvent for many substances including; acids, alkaline, salts and sugars. Water primarily exists on Earth in three states: solid, liquid and gas. It decorates the nature with its liquid form. In addition water decorates our sky in its condensed gaseous state, as clouds. Meanwhile its existence as a solid state in nature can be seen in colder climates as snowfall and ice. The movement of water in nature also gives rise to beautiful rhythmic melodies, as can be noticed near a river, in the beach and on the sea or at home when it rains. 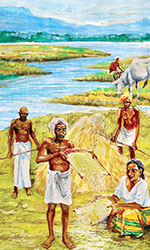 The etymology of 'civilization' provides an interesting insight into the relationship between civilization and water. The word ‘civilization’ is derived from Latin 'civilis' (civil) and 'civitas' (city), denoting a relation to the cities in which ancient citizens lived. All the ancient civilizations were formed near natural water sources making it one of the mankind’s most important resources. For example, the Egyptian Civilization was based on the banks of Nile River, the Mesopotamian Civilization on the banks of rivers Euphrates and Tigris, the Indus Civilization on the Indus River and the Chinese Civilization on the Yellow River or Huang He. Even in Sri Lanka, the progress of culture and civilization was entirely influenced by water. The earliest recorded settlements in Sri Lanka were established during the 6th - 3rd centuries BC based on rivers Malwatu, Kirindi, Walawe and Mahaweli etc. 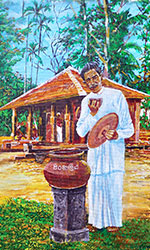 Given water's contribution to the development of civilizations, its relation to culture is inevitable. Since ancient times, water has been considered sacred in many cultures and religions. There are many water related rituals performed during the Sinhala-Hindu New Year in Sri Lanka. As a tradition, Sinhalese people start performing the New year ganu-denu ritual with water contained in a well, as a sign of paying gratitude. Both Tamil and Muslim communities also perform a number of water-related cultural rituals and practices. The village-temple-tank-pagoda concept is deeply rooted in the historical Sri Lankan cultural ideology which is also a sign of the prominence given to the water in relating cultural values to everyday lives of the people. People all around the world have some important 'water-element' imbedded in their cultures. Some consider water as sacred! 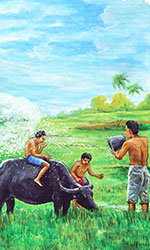 Historically, the economy of Sri Lanka has been primarily agricultural. Since the establishment of early settlements water has been a key factor in providing the necessary sustenance and livelihood to grow these smaller settlements into the great civilizations we are now a part of. After the very first known Kingdom of Anuradhapura was established in 548 BC, the Sri Lankan Civilization chose to be a water-based agricultural economy, maximizing the benefits from the country's geographical setting. The technology prevailed among ancient Sri Lankans help to achieve and facilitate massive agricultural projects. The story behind the construction of tanks and cannels suggests that the ancients were wise enough not just to understand the importance of water, but to understand the properties of both water and the land it flowed through in such a way that they planned sustainable kingdoms around it. 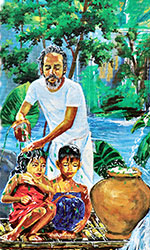 Water helps us to remain healthy by actively contributing to boost the immune system. However, to entertain this benefit, clean water should be consumed properly. Water is the main source of minerals for the human body and it contain many mineral components which are beneficial to us. Three of the most important such minerals are calcium, magnesium and potassium. Water also contains minerals which are harmful to our health, including arsenic, antimony, aluminum and barium. Proper water consumption patterns are of crucial importance in order for us to maintain the balance within the body and healthier functioning of muscles. Headache can also be relieved by water. Water therapy is famous among the treatment methods performed using water. Water plays a major role in Sri Lanka's traditional medicine as it is used to produce medicine for a number of diseases. 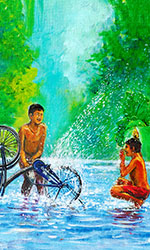 Since ancient times, water has been used as a medium for entertainment activities including various ceremonies and sports. Such activities in the Torrid Zone are based on rivers, streams and seas while snow based sports and ceremonies are dominant in the cold countries. Swimming, diving, ice skating are some of the examples for these sports. Similar sports and other related activities can also be seen in the Sri Lankan culture as well. Historical evidence found in Sri Lanka also suggests that the relationship between water and entertainment in this country is a long established one. For example, historical heritage site such as Sigiriya provides an important evidence for many water related activities performed in the historical times. 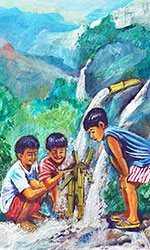 Water is a source of energy for both domestic and industrial use. The main utilization of water to produce energy is evident in electricity. Another application is the production of biogas. As the United Nations reveals, 2.5 billion of the world's population lack electricity. 15% of the water used throughout the world is devoted to produce electricity. Of the total water-based electricity production in the world, Africa accounts for 2.11%, Middle East and North Africa for 1.7%, Latin America and the Caribbean Islands for 13.2%, North America for 16.1%, Europe for 24.4%, South and Central Asia for 6%, East Asia 31.7% and South East Asia and Pacific for 4.8%. The first hydropower station in Sri Lanka was established by D. J. Wimalasurendra in 1950, followed by a number of similar stations in different parts of the country. Today, sea waves and the osmotic power of water are also used for this purpose. 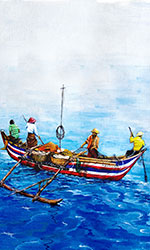 Water is used in various industries including agriculture, fishery, energy production and transportation, both directly and indirectly. Further, production industries such as rubber, coir, clay, salt etc. utilize water in many different ways. Water is essential for agriculture, the main traditional occupation of Sri Lankans. 70.1% of water used in the industrial sector throughout the globe is used for agriculture. In Sri Lanka, the historical and archeological evidence provides insights into the use of water for agriculture in terms of the ancient tanks, streams, rivers and canals. Mahaweli Development Programme initiated in 1961 is well-known for its contribution towards the development of agricultural activities in Sri Lanka. 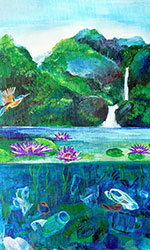 Water pollution is one of the most critical environmental issues that we are encountering at present. According to UN, 80% of the water polluted through human consumption is directly released to natural water sources without subjected to any purification process. Various industrial activities all around the world contribute to water pollution. WHO records that 844 million of the total population in the world are suffering from water scarcity and that 15.9 million are consuming underground water. According to the same reports, 31% of schools in the world lack clean water. Further, 2000 million of the world's population has been reported to consume water polluted with feces. It is a tragedy that one newborn baby dies of polluted water in every minute!

Almost all the great civilizations in the world were instituted based on natural water sources and this relation subsequently embedded into the cultural lives of people since the ancient times. The best Sri Lankan examples for the relationship between water and culture are seen during the Sinhala-Hindu New Year season where a large number of water-related rituals, sports and other activities are performed. Hence, water is related to entertainment as well. Water also plays a vital role in sustaining our health. Another application of water is the generation of energy using it as a resource. In Sri Lanka, generating electricity using water (hydroelectricity) dates back to 1950 when D. J. Wimalasurendra established the first hydro power station. Similarly, water is both directly and indirectly utilized in many industries in the world including agriculture, fishery, transportation, manufacturing etc

Water pollution is one of the top global issues encountered by humans, animals and plants alike at present. According to the UN, 80% of the water polluted by humans after consumption is directly released to natural water sources without being purified first, causing serious concerns for the sustainability of life on Earth.