Impact to the national GDP

The Premier integrated telecommunication service provider, Sri Lanka Telecom PLC. (SLT) announced its
group and company financial results for the year 2012, notching Rs. 6.17bn Group Operating Profit, a growth
of 19% Year on Year (YoY). Despite the gain on foreign exchange translation in the second half of the year
due to the appreciation of the rupee against the first half, cumulative translation loss on exchange for the full
year has diluted the Group Profit before Tax (PBT) and Profit after Tax (PAT). On a normalized basis (without
exchange loss on translation), the group has reported a PBT of Rs. 7.2 bn, an increase of 12% and PAT of Rs.
5.25bn, an increase of 10% YoY. However, after the loss on exchange translation, Group PBT and PAT
declined by 3.2% and 10% to Rs 5.97 bn and Rs. 4.04 bn respectively. 2012 has been a challenging year for
the SLT Group with the increase in fuel prices, hikes in energy costs and the rise in other input costs which
exerted excessive pressure on the profitability of the group. The SLT Group Revenue increased by 10% YoY
to Rs 56.77 bn.
The year marked another milestone for the SLT Group as it published its maiden annual financial statements
based on new Sri Lanka Accounting Standards applicable for the financial period beginning 1st January 2012.
Commenting on 2012 results, the Chairman of SLT Group Mr. Nimal Welgama said “as the country’s premier
integrated communication service provider, the SLT Group has been a catalyst of change and transformation
in post-war Sri Lanka, truly connecting the entire nation as One Country. One Voice. During the last three
years the SLT Group has spent Rs. 42 bn in capital expenditure displaying ourpassion and commitment to the
rapid growth of ICT in the country and further strengthening the position of the SLT Group as a key contributor
to the ambitious development plans of the government. Operating results of 2012 and investments made in
network modernization, capacity and coverage expansion demonstrates our quest and vigor to add value to
our stakeholders”
t company level, revenue increased to Rs. 34.72bn, recording a growth of 8%.This is the highest revenue
growth recorded since 2006 which was driven by an impressive growth of the broadband, enterprise data,
wholesale, international services and PEO TV businesses. The company posted a PBT of Rs. 4.68 bn and a
PAT of Rs.3.36 bn recording growth rates of 4% and 1% respectively.
Sri Lanka Telecom Mobitel (Mobitel), the mobile arm of the group recorded an impressive revenue growth of
13% in 2012 despite intensified competition in the mobile telephony sector. In absolute terms, Mobitel
recorded revenue of Rs. 24.93 bn in 2012 compared to Rs.22.08 bn in 2011, an increase of Rs.2.85 bn. This
growth was realized mainly due to the increase in Mobitel’s subscriber base by 14% which is a remarkable
achievement, considering the fact that the voice market has reached 100% penetration by 4Q 2012 according
to the Telecom Regulatory Commission of Sri Lanka (TRCSL). The growth in Mobitel’s subscriber base can
be attributed to various factors including Mobitel’s continuous commitment and investments made towards
scaling and upgrading its network infrastructure. Completion of the stage VI project in mid-2012 led to
significant enhancements in network coverage and capacity that has translated into better customer
experience. An innovative product suite, comprehensive service offering and extensive reach to the furthest
corners of the island also contributed towards significant growth in subscribers and revenue.
Prudent cost management initiatives coupled with measures to enhance productivity contributed to help
negate the adverse impact of increased operational expenditure. The company recorded a growth in key
profitability indicators EBITDA and EBIT which increased by 21% and 20% respectively compared to 2011. In
absolute terms EBITDA reached Rs. 8.28 bn while EBIT was recorded at Rs 3.24 bn. The company EBITDA
margin improved from 31% to 33% which further endorses the operational efficiency of the organisation. Thus
viewed in the light of the above, during 2012, Mobitel delivered a commendable performance successfully
overcoming the challenges encountered, recording PBT (normalised to exclude exchange loss) of Rs. 2.98 Bn
and PAT of 2.43 bn, recording growth of 34% and 38% YoY respectively, the highest ever normalised profits
recorded.

SLT Publications, the publishing arm of SLT Group delivered impressive results with a revenue of Rs 516 mn
and PBT of Rs 214 mn, recording growth of 25% and 116 % YoY respectively. 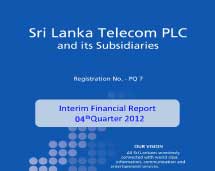